0%
Polynomial Regression Full Implementation.
You will use use the most basic and the Polynomial model to predict results.

In this notebook, we learn how to use scikit-learn for Polynomial regression. We download a dataset that is related to fuel consumption and Carbon dioxide emission of cars. Then, we split our data into training and test sets, create a model using training set, evaluate our model using test set, and finally use model to predict unknown value.

Sometimes, the trend of data is not really linear, and looks curvy. In this case we can use Polynomial regression methods. In fact, many different regressions exist that can be used to fit whatever the dataset looks like, such as quadratic, cubic, and so on, and it can go on and on to infinite degrees.

Now, the question is: how we can fit our data on this equation while we have only x values, such as Engine Size? Well, we can create a few additional features: 1, $x$, and $x^2$.

PloynomialFeatures() function in Scikit-learn library, drives a new feature sets from the original feature set. That is, a matrix will be generated consisting of all polynomial combinations of the features with degree less than or equal to the specified degree. For example, lets say the original feature set has only one feature, ENGINESIZE. Now, if we select the degree of the polynomial to be 2, then it generates 3 features, degree=0, degree=1 and degree=2:

But what if we have more than one predictor?

For 2 predictors, the equation of the polynomial regression becomes:

For n predictors, the equation includes all the possible combinations of different order polynomials. This is known as Multi-dimensional Polynomial Regression.

But, there is a major issue with multi-dimensional Polynomial Regression – multicollinearity. Multicollinearity is the interdependence between the predictors in a multiple dimensional regression problem. This restricts the model from fitting properly on the dataset.

Try to use a polynomial regression with the dataset but this time with degree three (cubic). Does it result in better accuracy?
In [ ]: 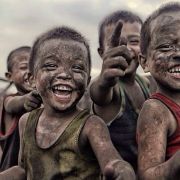